To Psychic or not to Psychic 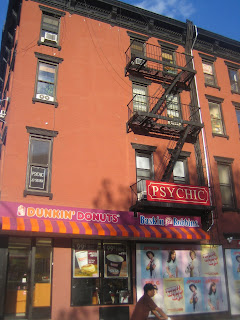 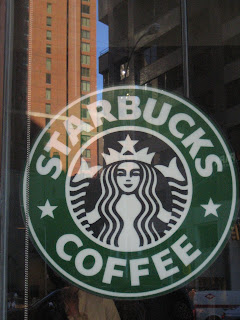 One of the first things I noticed when I arrived in New York were the Psychic shops. The Psychic shops in New York vary from ramshackle dens with toothless pregnant Romanians yelling out desperately to give you a five dollar reading, to up market palatial suites complete with designer couches, candelabra and half hour readings for two hundred dollars. The phenomenon of psychics is not dissimilar to the phenomenon of Starbucks or Dunkin Donuts. They are just as popular and seem to attract a similar crowd.
My three points of confusion regarding psychics in New York are a) how do these people pay their rent and b) are there really that many disempowered, confused people in this city to warrant the success of so many psychics and c) how can they all be right about your the future.
On arrival to New York I thought about making a documentary about this psychic phenomenon. I could go and visit a handful and compare the readings they give me. The only problem with that would be a) my Jewish superstitious tendencies would not let me step foot into one of their shops lest they point the evil eye in my direction and b) the size of the camera I am supposed to use is not exactly conducive to the hidden camera technique required. So I abandoned the idea long ago...
However, as I walked through the East Village yesterday recovering from the flu and from the recent realisation that my potential film subject, Evelyn (the Sierra Leone refugee), had stopped returning my calls, I passed a Psychic and had a serious moment of temptation. 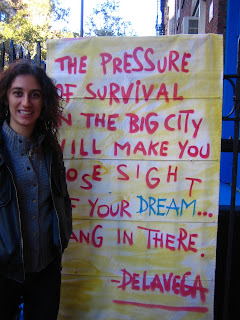 Feeling like I was back at square one, no documentary subject and New York winter around the corner, I started to empathise with the disenfranchised and disempowered clientele who visit their psychics regularly. I'll stick to psychotherapists, I thought and kept walking passed the ominous sign.

I headed to the De La Vega Museum which is a hobbit like enclave of graffiti art made by James de La Vega, an East Harlemite artist who set up shop in the East Village. His art is a testament to the spirit of human Hope...His catch phrase is BECOME YOUR DREAM, which you can notice painted on random objects throughout parts of the city. 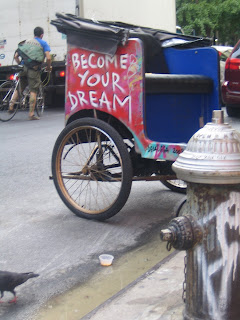 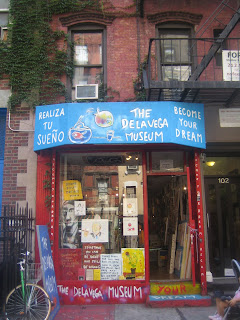 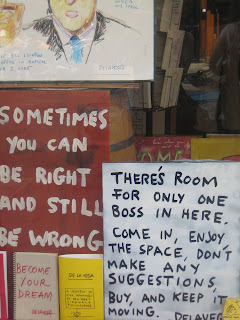 He is a quiet, alluring character who interacts minimally with his customers. Generally he can be found at the museum smoking his Cuban cigars, despite the no smoking sign at the front. A clear statement of his indifference and superiority to authority. Depending on his mood he will be engaging or sarcastic.
A young naive looking woman came into the shop and started asking him some innocent questions. "Is de la vega still alive?"
"No, he died four years ago."
"Oh, that's a shame"
"Was de la vega Jewish," in response to some stickers stating 'jews only.'
"Yeh" De La vega answered with such spontaneity.
The conversation continued between this sweet young girl and De La Vega, who likes to amuse himself with such humour.
There was thumping reggaeton music blaring out of the speakers.
"I like this music what is it?"
"It's Julio Iglesias", he wrote the name down for her.
"Thanks for your help, what's your name?"
He stammered as he tried to quickly find a name for himself.."Geoffrey"
"Thanks for your help Geoffrey".
She walked out and he turned around with a blurt of laughter.
"I love fantasy, sometimes it's just more fun than reality". I could certainly agree with him on that. 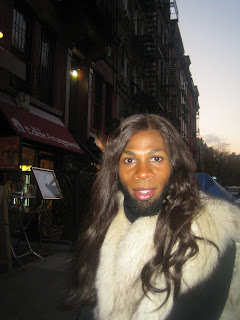 As the afternoon turned to evening I met some interesting characters who gathered at the "Become Your Dream" monument. Roger, an older Jewish man who is a self proclaimed ex-drug addict turned comic and Alistair who is a vivacious guy who pushes the boundaries of self expression and gets flown around the world for fashion shows. Alistair had just arrived to the museum from Church with an evangelical glow to his hair, inspired by the group mantras and chanting. Roger's cynicism provided a touch of salt to the upsettingly optimistic banter. He has started making art in reaction to De La Vega's hopeful mottos. He has a T-shirt that states " If you don't become your dream, ask de la vega for a refund..."
Posted by CuriouslyCreating at 8:57 AM