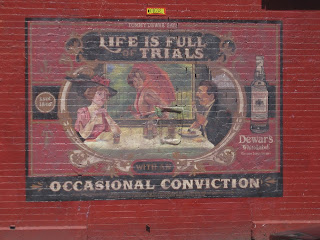 Life is full of trials. Sometimes walking through the East Village I feel like the bricks talk to me with their grafittied messages. I am learning alot about documentary film-making and about NYC. A wonderful motivational speaker Randy Palusch (find him on you tube), who since died of pancreatic cancer said in his final lecture: "Experience is what you get when you get what you don't want". In many ways studying film in NYC has been quite an 'experience'. My cinematographer teacher and Academy award winning documentarian stated: "finding a documentary story is like falling in love, when you find it you know it's meant for you". There have been alot of analogies made between making documentaries and finding a partner. They refer to the inital stages of finding your subject as 'dating'. I have most certainly become the dating queen in NYC, in a metaphorical way I mean. I have used all the tricks, I've tried the cold call, the playing hard to get, the 'I'm not so interested anyway', I feel myself regressing into an adolescent version of myself.
As for my classmates, we have watched each other fall to pieces, rise with ecstasy at a return phone call from a potential subject, turn pale with disappointment as the playback footage is no good, fall into a state of depression at the rejection by a film subject. All the emotions of love playing out daily in the classroom. Joy, Sadness, Disappointment, Hope, Faith, Confusion, Jealousy...a cocktail of life in such a short time. It makes me think alot about the Buddhist idea of non-attachment. The way our moods and emotions are so pinned to external events. The way a face can transform from hopelessness to triumph in a single phone call.
On my way home from school I built up the courage to enter a psychic shop and ask if they would be interested in taking part in a documentary film.  I hoped the lady wouldn't tell me something that I didn't care to know. The middle-age lady psychic was sitting bored in her chair as I entered her decadent 'office'. Her face brightened with excitement at a prospective client. "I am wondering whether you would be interested in taking part in a documentary film about psychics in NYC? It would involve an interview and the filming of one of your readings?" I asked innocently. She looked at me with a completely genuine face and replied that she charges between nine-hundred and one thousand dollars to be interviewed. I thanked her politely and quickly made a run for it before she could glean anything about my next few months left in NYC. I'd prefer to live in hope than be disheartened with bad news. It would have been helpful if she could have at least given me a clue about where to go to find a film subject. 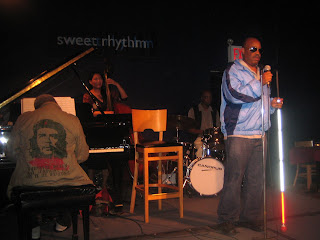 I decided it was time to reacquaint myself with an old friend. Frank Senior and I met at his newstand on 5th avenue and 42nd street when the air was still balmy in NYC. Our meeting had resulted from a random, 'cold email', from one end of the world to another. I had sent an email to a blind association in NYC enquiring whether anyone would be interested in taking part in a documentary film. Frank responded with enthusiasm and when I arrived in NYC we met for a drink and a chat.
Frank grew up in the Harlem projects and was blind from birth, a result of a premature labour and hypoxia to the optic nerve. We met on the corner of the street where he was standing with his reflective ray bans and white stick. "Are you Frank?" I wanted to confirm that he was actually blind.  "Yeh, that's me", he responded in a baritone voice. "Do ya mind if I just hold your arm here it's a hellova lot easier than this stick!". Before we'd even started a conversation I found myself leading a blind man, intimately arm in arm down fifth avenue in search of a place to drink.
I learned alot about Frank and our 'date' went quite well. I learned about the recent death of his german shepard guide dog of six years, the benefits and disadvantages of the stick, how to survive in the subway as a blind man and what it means to be blind and black in NYC. He said if someone offered him a million bucks or his sight he would take the million bucks. "This is who I am now, if you'd asked me that when I was 30 I would have answered differently". Frank invited me to a jazz club downtown where he was making a guest appearance that night. We walked from 42nd to 12th st in the West village, my arm tensely hooked into his as I tried my best to be a good guide. A real case of the blind leading the blind in NYC. In some ways it's like calling an 'ex' but I'm hoping Frank might be interested in being my new 'boyfriend'.
Posted by CuriouslyCreating at 1:22 PM