Tears for Obama in Harlem... 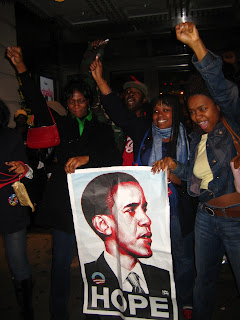 There was a palpable mix of anticipation, excitement and fear that permeated the streets of New York yesterday. From six in the morning there were record breaking queues at the voting booths. People were coming out to vote like never before. As I walked down the Avenue of the Americas it was impossible to ignore the significance of the day. I listened to snippets of sidewalk conversation: A woman walking her dogs and bidding farewell to a friend: "See you tomorrow on the other side of history". Two black dishevelled homeless men selling Obama paraphernalia. The shops were emptied of their iconic Obama stock, the election was hours away.
I felt privileged to be in America for this unique moment in time. I headed to Harlem to witness the night unfold. Standing on the corner of 125th st and Adam Clayton Powell, I stood with thousands of hopeful African-Americans as we watched the individual states progressively announce their results.
The crowd erupted in unison with screaming, dancing and tears. Barak Obama elected 44th president of the United States of America. I turned around to see an old black lady fall to the ground convulsing with emotion. People yelling out to Jesus with gratitude. " O-BA-MA, yes -we- can! O-BA-MA, yes- we- did!". 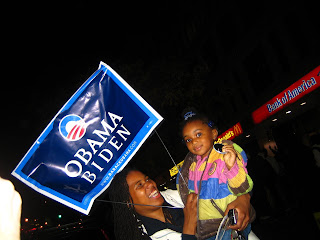 Music started blaring out of the speakers "ain't no stopping us now- we're on the move..."a funky 70's tune by Mcfadden and Whitehead was the celebratory anthem. The crowd starting grooving and singing euphorically "aint no stopping us nowwww we're on the move...we're on the move..."
It felt like a New Years Eve celebration combined with the emotion of a birth. People gathered in groups to dance and chant "Yes we did! Yes We did!". Making music with pots and pans, banging against traffic light poles, honking car horns in the rhythm of the iconic chant " Yes we can! honk-honk-honk" . 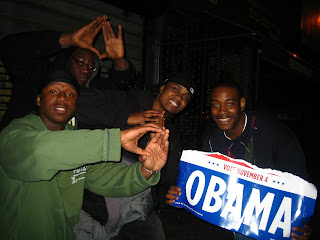 The whole street was pulsating to the three beat rhythm YES-WE-CAN- O-Ba-Ma. People danced on their cars, hung out of bus windows and were surging with excitement and relief. The police were everywhere and frustrated to be working on such an exciting night. A black woman ran up to a policeman and embraced him with excitement. He smiled and reciprocated with a hug. Black rastafarian men high-fived middle aged white men. It was humanity at its best, there was a euphoric sense of unity, regardless of age, gender, nationality or race. 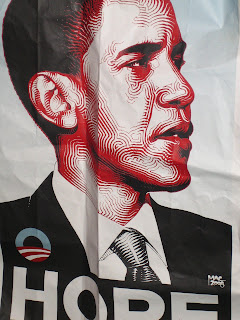 Having lived for the past eight years with the the childish and uninspired figure of George Bush looming over the world, it is a welcoming yet unfamiliar sensation to be inspired by an American President who captures one's spirit and hopes so magically. He has a unique capacity to sear through to the universal hopes and dreams of the individual and inspire each person to move towards their own potential and make a difference in the world. After watching his acceptance speech a few times over I was forced to think about what I am doing in my life to better the world. As the bright Autumn leaves fall off the trees in Manhattan and the rain starts to wash away the elation of the day, I leave the rapturous memories of election night in Harlem and wonder how the words and ideas of Barak Obama will develop into a reality..
Posted by CuriouslyCreating at 1:32 PM

Email ThisBlogThis!Share to TwitterShare to FacebookShare to Pinterest
Labels: http://3.bp.blogspot.com/_lE95ILEBV3Y/SRJEjyUXvUI/AAAAAAAAALY/CDn80a5wxlY/s320/IMG_6757.JPG