I am always inspired by people who manage to transform a creative idea from a mere thought into a reality. Peyo, a camping festival which was birthed by Nitty Rapke and Marty Page three years ago, is an inspiring festival that brings creativity and community together. After travelling the world for three years and drawing inspiration from the Amazon rainforest, Burning Man Festival and a myriad of other places and people, Peyo was born. 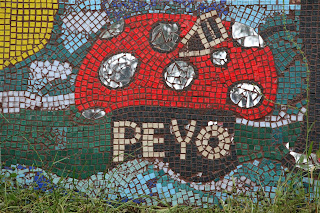 Since 2008, each year over the first weekend of November, a group of friends and friends of friends gather at a campsite near Shepparton to celebrate community and creative expression. The philosophy of the festival is simple: everyone is a participant. Each person is encouraged to use their imagination and contribute something to the Peyo community.
There was tension in the air in the lead up to Peyo 2010, with flood warnings for the entire weekend. The weather report scared a few people away but the rest came well prepared with gumboots, raincoats and a readiness to brace the storm. I was in the local bakery buying bread for a communal french toast I had planned as I wrestled with doubts about whether to go or wait for the storm to pass. As if by telepathy, Nitty walked past the entrance, with Ruby, her 11mth old baby on her waist looking excited and optimistic.
"Hi el! when are you leaving?"
"Nitty, have you seen the weather report, there are flood warnings?"
"Ah, it'll be fine. Just bring your Peyo spirit?" She was unstoppable.
Her wildly optimistic attitude seemed on the verge of deluded but her spirit tugged me along for the ride. The rain came with force but it didn't stop people from dancing in the mud with their pink gumboots purchased for ten dollars at the local K-mart. As the rain beated the ground into an orange clay the DJ's kept playing and desperately dug trenches around the equipment to protect it from flooding. The coffee machine which had been donated to the festival was a source of comfort in the rain, as was the 'crazy bar' that promised frequent happy hours. 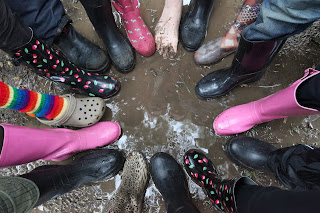 In past years, Peyo days were spent swimming in the river but this year people were huddled in little gatherings under gazebos and tents. I spent three hours making french toast for passersby, whilst in the main square a group was rolling out fresh pizza dough for the celebrated mud brick pizza oven which was made on site. There was a special 'frutopia' hour where Saul and his lovely pregnant wife Kez dressed up as a life sized banana and Carmen Mirandesque characters and served fresh punch to the delighted, damp crowd. Hoola Hoop making workshops, jelly bean guessing competitions (which I was so excited to draw first in!), a well stocked dress up corner, live performances by anyone who had something to share, and communal dinners where the fuel of Peyo. When the rain finally stopped there was a life drawing class led by artist Dave H and facilitated by life model and good sport Benj D. A novel idea was the workshop hosted by Debbie W 'love in a bag', which involved writing one's names on a brown paper bag and having others deliver little notes with compliments and positive affirmations about you. There was even a bag for the mosquitoes who had compliments such as "thank you for staying away from me". 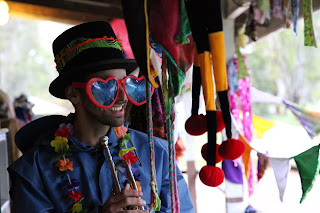 Peyo is the essence of true community with people of all ages and stages. There were babies in the womb and out of the womb. New love, old love. I was inspired to see the determination of new parents Ricci and Ori in their yellow campervan with a three month old baby in tow and Mikki and Hadas with their four children under the age of six who they managed to take fishing, teach fire twirling and have in bed ready to make their mojitos for happy hour at midnight! Please tell us your secrets!
Over the weekend I realised that a fundamental quality of any leader is a wildly optimistic attitude and a strength and commitment which keeps the masses on course despite potential unplanned obstacles. Peyo 2010 was an inspiring example of what can happen when vision, determination and community come together in the rain. Thanks to all who made it happen.
What is the creative idea that you've been thinking about for too long? What do you need to make it happen? What is stopping you from taking the next step?
www.peyofestival.com.au
Posted by CuriouslyCreating at 1:00 AM