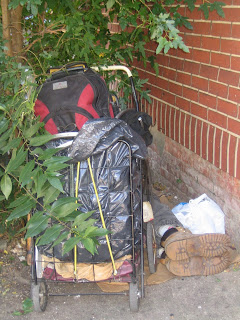 It's really hard not to notice the homeless people of New York. Perhaps because they are set against a backdrop of unprecedented consumerism and ubiquitous ipods. Or perhaps because they mount the subways and hold you as a captive audience telling their stories like old records, dusty and unnoticed at a flea market. I watched as an old black woman, spine twisted and scarf over her hair, pushed a trolley through the train carriage. Silently praying to Jesus for assistance as she held out a paper cup for some pennies.  People couldn't hear her, they chose not to hear her. Their eyes saw through her as they listened to their ipod's shuffle.  An Asian woman handed her a loaf of bread. She accepted graciously and continued her pleas to Jesus.
There are different types of street people in this city. A more entrepreneurial man is Donald Green who has been coming to West 4th st. for more than ten years to sell his poems. He sits at his card table dressed in a black suit in the heat of summer with a sign assuring his audience he is a real poet: "New york times published poet sells his poems". I approach him with curiousity. I start asking him questions and within a few moments his irritation becomes apparent. "Are you gonna buy a poem or not?". I assure him I will purchase one and he settles back in his chair. I wonder what drives this man to come here everyday and write poetry. Is this a choice? I think not.
I approach him both with the lens of a psychiatrist and with an interest in his poems. There are certainly advantages to being a psychotic poet. The chaotic thinking and altered thought stream allows associations and a freedom of language that ordered thinking restricts. I talk to him and wonder how much of his story is true and how much is fantasy. It turns out he was published in the New York Times but more for his eccentricities than his poetry.  I ask him to write a poem titled "Happiness in New York".
Happiness in New York
Happiness in New York 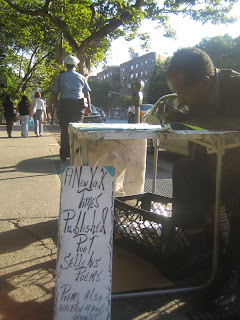 Is that Found?
Happiness in New York
Is that Found?
This poet has a blue sense of New York,
the need by the close of the 20th century
for abundant money to just have residence in New York.
If your soul seeks variety,
the houses and gardens of greenwich village,
the houses and sites of harlem,
chinatown, el barrio,
If your soul seeks variety, there's joy in New York.
Happiness in New York,
for some it's people, in all their differences.
For some its energy, its pace,
its whizzing cars, its whizzing feet, exhilarate.
Pressure for some but for others wouldn't be missed.
New York, this possibility, this adventure.
Happiness is your positive approach,
your mind in belief of what stories it can bring.
-Donald Green-
Listen to him at : http://www.drunkenboat.com/db3/green/bluejoy.htm
Posted by CuriouslyCreating at 4:23 PM