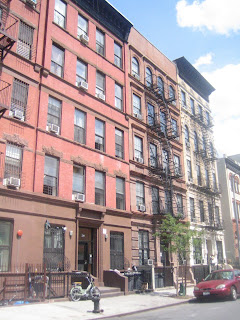 Yesterday I caught the F train across the grid of Manhattan from Brooklyn to Harlem. After a forty five minute train ride I arrived at the meeting spot for a walking tour..thirty white folk were standing around the footpath waiting for the guide whilst a very drunk-psychotic Harlemite saw an opportunity to take centre stage and give us a dream like interpretation of Harlem's history and politics, spluttering and spitting with immense enthusiasm.
Waiting, waiting we finally discovered that the tour guide had cancelled after having an accident. It looked like our drunken friend may at last have found  his long awaited opportunity... 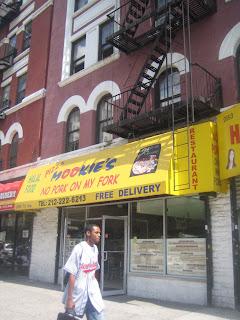 I branched off with a middle aged Jewish man from the Bronx and and middle aged Jewish mother from New Jersey. He was the classic american type who unashamedly boasts and retells his life like it was straight from Hollywood. It's hard to know whose authentic and whose not in this city, even with Psychiatric training. He fell into a nostalgic dialogue about the 'dream' his life had been. I'm cynical of anyone who has to explicitly convince me their life has been a dream. After leaving the teaching profession he had become a sports advertiser. He recounted the time when he called up Mohamed Ali to invite him to the movies: "He was really tired and I just said, cummon Ali. As we came out of the theatre there was a crowd surrounded by police and the chanting 'Ali Boombaye'. He's a lovely Guy Ali."
It's a give away.... the degree to which one boasts about one's life is inversely proportional to one's level of true happiness...My theory proved correct when his woman friend found out I had been doing Psychiatry and stated out loud that he really needed some therapy.
I found an iconic restaurant called Sylvia's on Lennox Ave. It was filled with tourists and a few Harlemites. Unless you eat meat, don't go to Harlem for food. 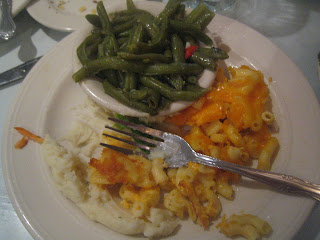 With my belly still empty and my tongue layered with salt, I headed back to the sizzling cement. Walking down the streets of Harlem was reminiscent of Havana in some ways. There is the same culture of sitting. So many people just sitting on the sidewalk. Its an art form I would like to master. The old black men who take pride in their outfits of the day, women standing on the street discussing how long their braids took to do. There are street stalls and many Obama T-shirts being sold. Most people feel he's not going to win. If he does I'm coming to Harlem to find the party.
Posted by CuriouslyCreating at 9:08 AM

Email ThisBlogThis!Share to TwitterShare to FacebookShare to Pinterest
Labels: http://3.bp.blogspot.com/_lE95ILEBV3Y/SKRij1FFq3I/AAAAAAAAAD8/rgCtTbAN6N4/s320/IMG_3887.JPG