A lonely planet for entrepreneurialism: The $100 Start Up 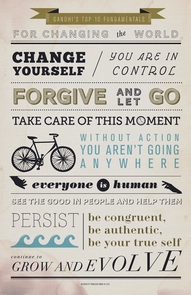 If you’ve been dreaming of launching that new business and living the location independent lifestyle, The 100$ Startup by New York Times bestselling author Chris Guillebeau is your perfect companion. Chris is an impressive entrepreneur who has spent the past five years writing about his quest to visit every country in the world before he turns thirty five. His popular blog, The Art of Non Conformity, has become a successful six figure online business and a vortex for freedom-seeking, socially conscious, community lovers from across the globe.

The $100 startup is like a lonely planet guidebook to entrepreneurialism. With both a collection of inspiring stories and specific roadmaps and warnings, it guides the reader in navigating from idea to business on a shoestring budget. There are discussions and clear pointers along the path of idea development, marketing, pricing, and product launch, including extra resources at the associated website www.100startup.com. Chris discusses the key to “the quest for personal freedom [as being] through the pursuit of value for others” emphasising the need for convergence between your passion and something  that someone else would pay for. He flirtatiously warns his readers that “there is no rehab program for being addicted to freedom. Once you’ve seen what it’s like on the other side, good luck trying to follow someone else’s rules ever again.”

Throughout the book there are diverse stories of micro-entrepreneurs who have found their way to success through different routes. Whether choosing to leave a soul suffocating corporate job or being made redundant and forced to take steps to innovate, each story is inspiring in its trajectory. A particularly inspiring interview describes Brett Kelly, a man who was struggling to financially support his family and noticed an opportunity in the market place. He realised that there was no existing manual for the Apple Mac Evernote program. He took a few months to develop one himself, published it as an ebook and made $120,000 which was followed by a phone call from the CEO of Evernote offering him a lucrative position at the company. The book emphasises paying attention to opportunities that may exist in our rapidly changing environment and bringing ideas into action to allow serendipity to do it’s work.

The book is in many ways the manifestation of a movement, “the rise of the roaming entrepreneur”, evidenced by the annual World Domination Summit (WDS) hosted in Chris Guillebeau’s hometown, Portland. It is a conference founded by Chris and aimed at those who are interested in living “remarkable lives in a conventional world”. This year the key note speakers ranged from Jonathan Fields, writer-entrepreneur to Scott Harrison founder of Charity Water. In its second year, WDS was a sell out within hours of its online ticket sales with next years event sold out six months in advance.

Committed to contributing to the world and sharing the business lessons he has learned, Chris motivates people from all over the world to take a leap into life. After receiving an anonymous donation of $100,000 from someone who attended the conference, Chris decided to generously “invest” in each of the attendees by giving everyone one hundred dollars on departure and inviting them to spend it how they wished.

Leaving the conference with a free copy of the $100 Startup and a one hundred dollar bill in my hand I reflected on his gesture as both an ingenius marketing strategy and a brilliant way of conveying his underlying message:

There are no excuses for not starting. Take action now.
Posted by CuriouslyCreating at 7:22 PM