A day of cooking 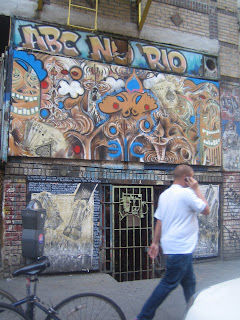 On the hunt for stories, I stumbled across an organisation called Food Not Bombs. It was founded in the early eighties as an outgrowth of the anti-nuclear movement. It is an organisation that has branches internationally and runs through food donated from various organic shops which is cooked up and served to people in need. It has no religious affiliation but rather strives to build community by bringing people together through food. It operates on the anarchist belief that we must work to build alternative institutions at a grassroots level to help create the just society we would like to live in.
I was slightly hesitant to attend the group located in an ex-squatters building called ABC-no rio, as the reference to anarchy instilled a fear of arriving upon a group of extreme left wing, judgmental hippies who would interrogate me about my dietary habits and possibly my political stance on the middle east. I was pleasantly surprised to find a small group of welcoming individuals some studying, some being activists, who donate one Sunday every week to cook for the homeless people in Thompkins Square Park.
One woman who has been running the group for a year was from Canada and moved to NYC to study genetic counseling. We discussed the experience of moving and living in NYC and she confirmed my feelings of it being a rollercoaster ride. When I expressed my awe at her commitment to this group she assured me that she had thought about quitting many times but then had been moved by an event or a person which kept her involved. Food not Bombs seems to provide a sense of community to the volunteers as well as the receivers, and that is a fundamental survival need in NYC, finding community.
The cook up was attended by an eclectic bunch including the genetic counsellor, a dramatic and very charming gay dog-walking activist, a Turkish academic doing his PHD on logic, a young woman from Queens and a few other artsy types. 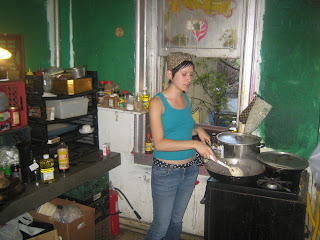 Despite a very poorly equipped kitchen, the
meals were cooked over a few hours and the next task was delivering the food to the park. Getting anything anywhere in New York is a challenge. As I discovered with my camera equipment. I have often watched empathetically at the double bass players of this city and wondered how they manage. Fortunately, the park was a few blocks away, avoiding the need for a subway and there had been a special cart designed by an old volunteer which enabled reasonably smooth transport. 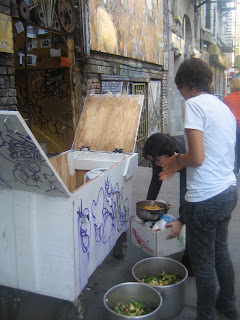 The food was carefully stacked into the cart and wheeled down Clinton st, carefully guided by one person on each corner of the box. The more experienced volunteers explained that we would rotate between serving and eating, as eating the food generally made others feel more comfortable and reassured.
The crowd was a mix of stereotypical homeless old men, a few drunks swaying their bleeding hands around, some lovely older women with their pushing trolleys and missing teeth, and quite a few people who were dressed like me but thought they would take advantage of a free meal. The group of chess playing homeless men didn't stop their games for food so I decided to do some 'table service'. I found James, the man that crotchet's hats. I was surprised when he refused my offer. Amidst the crowd was a young African woman who was chasing after her little girl who kept coming up to the cake and sticking her fingers in it. She was dressed quite well as was her daughter. As the crowd thinned I offered her some cakes that were left over. She was appreciative and assured me that she really needed the food. Her little daughter was befriending strangers and amusing the drunk old men whose faces seemed to soften in her presence. Her name was Paula and her mother Evelyn. 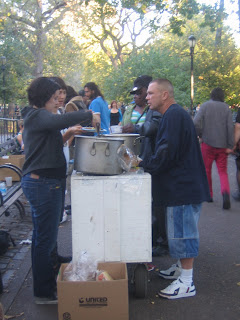 Evelyn looked like she may be from somewhere in West Africa. Her hair was braided and held together in a pony tail. She was wearing casual Western clothes as was her daughter. She told me she was a refugee from Sierra Leone. She had moved to New York six months ago from Texus. I asked if we could meet the next day to hear more about her story. She told me she was living in a refuge and gave me the address. Whilst we talked her little girl climbed into the empty food boxes and tried to hide with a cheeky smile. We parted ways and I watched as she pushed the box along the ground with her daughter inside and a handful of cakes balancing in her arms. A few drunk men giggled as they witnessed the comical scene. I felt I may have finally met my documentary subject.
Posted by CuriouslyCreating at 6:47 PM